Skillfully carved elephant statue 52” overall height, including the simulated ground which is also solid wood. This carving is honoring the highly regarded beast of burden of Thailand. For many years the elephant worked the forests and fields with the Thai people. The people know that without the elephant it would never reach its greatness as a kingdom.
“Unlike most of Thailand’s forests, the wooded areas surrounding the country’s hundreds of Buddhist forest monasteries still stand. The monks who live there deserve all the credit. The golden sheets of saffron cloth that they wrap around the trees save the trees from being logged. The trees, in turn, create sanctuaries and keep pockets of habitat intact for Thailand’s wildlife, including elephants.

Although Thailand introduced a logging ban in 1989 to protect the country’s last refuge for biodiversity, the ban has been largely ignored in remote locations and deforestation continues. Some monks began “ordaining” trees in the country’s threatened forests by draping robes around them and whispering Buddhist blessings. Once the sanctified trees became true “monks,” even illegal loggers fear felling them.

Ordained trees make up temple forests that guard critical habitat for the sacred Asian elephant, a central figure in Buddhist folklore and Thai mythology. Buddhists believe that on the eve of Buddha’s birth, his mother dreamed of a white elephant with a lotus. Touching one of these elephants–which aren’t purely white, but pale and “illustrious”–can help Buddhists reach enlightenment. When a white elephant is found, the king decrees it royal because it is believed to bring good luck and prosperity to the kingdom. Six royal white elephants are currently held at the Royal Elephant House at the Thai Elephant Conservation Center.

For the forest monks, Buddhist teachings go hand in hand with the environmentalist principle of “deep ecology.” Both unite ecology and spirituality. Both stress interrelatedness and oneness. Both encourage a reverence for all life. Given these similarities and the religious and historical significance of the elephant, monks’ calls for forest conservation aren’t entirely surprising. And in a country that is 95 percent Buddhist, their power of persuasion shouldn’t be surprising either.”
—Elizabeth Quill

From intricately designed temples to one of Thailand‘s most famous beers, elephants in Thailand certainly have quite a reputation. Chang, meaning elephant, is Thailand’s national animal. Find out how this came to be. There are a number of reasons why this giant animal was chosen as Thailand’s national symbol, a key reason being that the Thai people celebrated the elephant’s incredible strength, durability, and longevity.

The white elephant (actually more pink in color) is a symbol of royalty in Thailand as well. According to Buddhist tradition, on the eve of Buddha’s birth, his mother had a dream and was given a lotus flower by a white elephant. The animal was so revered and respected, it was even on the Siamese flag until the early 1900s. Because white elephants were incredibly rare, they were only used for royal duties. 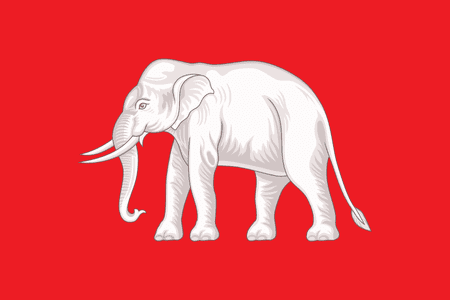 This is how the Western white elephant gift exchange came to be: Thai kings would offer white elephants as gifts to their rivals, but because the animals were considered sacred, the elephants could not be put to work, made useful in any way, or be given away. Instead, the recipient of this gift just had to take care of it, which is an expensive endeavor. The white elephant was seen as a burden but one that the gift-receiver could get rid of—hence the holiday exchange game.

History of the elephant in Thailand

The elephant’s role in Thailand began as early as the late 1500s. The Thais took advantage of elephants’ sheer size and strength to fight against the Burmese, Malays, and the Khmer to protect the Kingdom. n addition to playing a part in Thailand’s battles, elephants were put to work across the country for generations. From hauling teak wood to logging the dense jungles in the north, elephants were used in lieu of machinery. Elephants were trained until about the age of 10 before actually being put to work, and they did not retire until about the age of 60.